Google Doesn’t Lie: Evidence of Racism During the Katrina Tragedy

The following graph is trend data from Google’s Insights for Search tool for the search term ‘niggers’. Note the first real deviation from the trend as searches begin to really spike somewhere within Aug. 29-31. The peak is on September 3rd, and by the 11th of September searches have reverted to their normal rate.

Here are the geographic distribution and the list of top searches during this period. 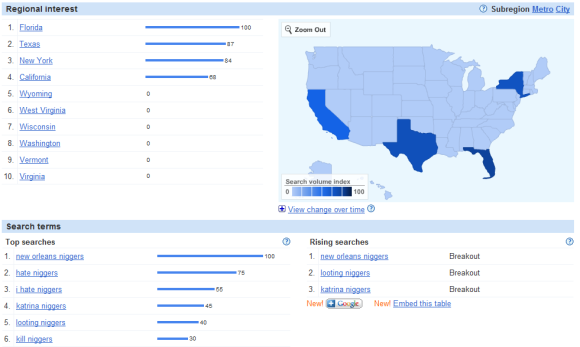 The story here seems pretty simple; large-scale natural disaster in a prominent city with a majority black population (67.5%) seems to have provoked a pattern of racial animosity that is visibly concentrated in California, Texas, Florida, and New York. Keep in mind that this picture is incomplete for at least two reasons. First, Google’s search data may not be fully aggregated and indexed or have been made searchable yet. Second, the search data is incomplete because people can block their information from being tagged with geographical parameters. And there may be other idiosyncratic reasons as to why the data is severely under-reported, but there is nothing I can see that mitigates the conclusion that a non-negligible group of Americans continues to harbor vicious racial animosity.

Here, by the way, is the link to the Google Insight for Search page that this data came from.